Critic’s Comments for Connor in ‘Closer to Heaven’

Program Cast Notes: Connor trained at the Urdang Academy in London. Theatre credits – Bill Snipson in Me and My Girl (Shaw Theatre) and Bud Frump in How to Succeed in Business (bloomsbury Theatre).

Chris and That Connor Brabyn’s Mile End Lee in the second act, Brabyn showed he had an excellent, strong singing voice – how on earth was he not cast as the lead?

Official Theatre Connor Brabyn’s swaggering Mile End Lee, brimming with lean sexuality and confidence with everyone he meets, but touchingly awkward when an emotional connection with Dave rears its head.

Sardines Magazine an attractive drug-dealer, played by the gifted Connor Brabyn, called – wait for it – Mile End Lee. At this point I started thinking of a very different urban underworld show based on Damon Runyan characters, not to mention the neglected British ‘Soho’ show The Crooked Mile. Still, Brabyn’s performance as Lee singles him out as an actor to watch with his commanding stillness and quiet intensity.

Gaystar News  For me, the revelation was Connor Brabyn as drug-dealer Mile End Lee. If you were being hyper-critical he’s probably a little too pretty to play this role, but his performance was natural and easy and it will be interesting to see where he goes next with his career.

British Theatre Connor Brabyn is compelling as the doomed Mile End Lee. Ostensibly the tough, uncaring drug dealer, Brabyn finds the complexity and torment in the role and subtlely, but surely, emphasises those parts. His awkwardness when Dave praises his beauty is perfectly judged, as is his disdain when having sex with Billie. He and Thompson excel in finding the wonder and the harmony in their climactic Closer To Heaven duet. Equally, Brabyn convinces as the wanna-be hard man, his lithe and wiry frame coiled for action in that “Try me” fashion which causes people to back slowly away.

West End Wilma Mile End Lee’, the local drug dealer providing everyone with their hit, and catalyst to the plot twist of the show was played very convincingly by very recent Urdang Academy graduate, Connor Brabyn. Brabyn’s delivery of a stereotypical ‘east ender’ was admirable to watch. His ballsy portrayal of the typical cockney lad was great to watch, and his extreme commitment to the physicalisation of bodily functions (without spoiling too much) was excellent to see!

Bargain Theatreland Connor Brabyn as Mile End Lee gives an excellent performance, conveying a silence, and infuses the most endearing moment of the whole piece with an emotional truth that is lacking in other key moments.

UK Theatre Web Connor Brabyn quietly develops Mile End Lee from straight wide boy into gay chancer. He deftly moves from menace to tenderness. He has a striking voice – it is a pity that he doesn’t get more to sing.

Whats On Stage  The acting’s not quite tongue-in-cheek enough to surf the shonky dialogue, nor low-key enough to find its truth. The exception is Brabyn’s matter-of-fact Lee

The Stage Newcomer Jared Thompson as Dave, Amy Matthews as Shell and Connor Brabyn as drug dealer Mile End Lee negotiate their love triangle with enthusiasm and a gravity that thankfully defies the writing.

Theatre Monkey Book In supporting roles, Connor Brabyn (Mile End Lee) and Ben Kavanagh (Flynn) are actually reflections of each other. One may deal drugs, the other be a music assistant, yet both are trapped by circumstance and have an anger that drives them. Two thoughtful and effective pieces of work.

Grumpy Gay Critic Connor Brabyn is also very good as Mile End Lee. His demeanour is suitably terse and bullish. His couched bravado is probably the only enigma that the show has, hinting at the pathos behind his posturing.

Partially Obstructed View Vic is variously a heavy drug user or violently opposed to them depending on the scene, which makes for a tricky relationship with resident rough trade and drug dealer Mile End Lee (Connor Brabyn – I see the project to clone Ryan Phillippe has been successful.) Straight Dave visibly drools any time he sees Lee, then is confused when people ask him if he’s gay. 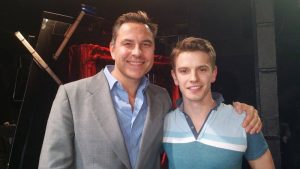 Liam Rudden’s Must See Theatre and Twitter Playing opposite him as the seriously damaged Mile End Lee, Connor Brabyn has a natural stage presence that marks him out as a star of the future. He boasts a knowing stillness rarely seen in one so young. It serves to heighten his vulnerability, ensuring the later scenes between Lee and Dave are quite devastating – there were tears throughout the audience.

Bobby Lockwood So proud of @ConnorBrabyn92 for #CloserToHeaven he’s amazing in it and it was so good to see him up there doing his thing! The shows great!!